We visited Yangshuo, a small town 65 Km south of Guilin, in July 2010. Here is what about.com has to say about this place:

“Guilin is the capital of Guangxi province and Yangshuo is a small, sleepy town about an hour’s drive away. For many, Guilin is an entry point to the area but Yangshuo remains a beautiful spot from which to experience the fantastic natural scenery of karst mountains popping up from the ground like a child’s drawing.”

We looked up the flight tickets on ctrip.com and figured out it is cheaper to travel over the week than over the weekend. So we decided to have a Tuesday-Thursday trip. Tickets were purchased for about RMB 1700 one way per person (we used Shanghai airlines and China Eastern combo for roundtrip). Interesting thing was that while we could get a Shanghai to Guilin flight starting from Honqiao airport (City airport of Shanghai), returning had to be to Pudong International airport, which added RMB 200 and 1 hour to our end-to-end travel time while coming back.

Booking on ctrip turned out to be a problem in many ways, my recommendation to travellers would be try some other sites too. Here are the problems we had:

Booking of the hotel was done by my wife and she found an interesting hotel for our stay, based on tripadvisor.com (which by the way is pretty reliable for various China travels we have done, highly recommended). These were expat-friendly and eco-friendly hotels, with great staff and service.

Mountain Retreat had a very homely feel, with personal touch in food, ambience and service. My daughter utilized their toys a whole lot and they allowed her to carry some of them to our rooms. They also had DVDs to rent if we wanted. Food was very good too.

Village Inn was a real village ambience (it was inside a real village) and the room we stayed in had been converted from an old barn and they had tried to preserve all the old, village feel. This barn-turned-room was separated from their rest of the rooms, and the toys and library books (they had pretty good, though small collection of books for everyone), a real farm connected to the room, and quietness all around us made it a more liked hotel for my kids than Mountain Retreat (even though Mountain Retreat had pretty nice views from the room).

Village in has an extremely good rooftop Italian Restaurant (Luna) which is very highly recommended (though waiting time can be a bit painful if you are hungry or have hungry kids around you!). Food was delicious and everything was prepared fresh.

Great places to stay, we were very pleasantly surprised and very happy with our stay and overall experience at these 2 hotels.

On the designated Tuesday, after the fiasco of right terminal, we finally boarded the flight, only to be told that the flight is indefinitely delayed (which finally turned out to be 1 hour delay). The hotel guys had arranged a taxi to pick us up (very decently priced taxi: 280 RMB), who knew enough English to strike a conversation (rare experience in China for us). I was amazed to see the uniquely shaped mountains which indeed looked like drawing by someone who hasn’t seen real sloping mountains , so all through my journey to Yangshuo I kept clicking photos from the running car.

We reached the hotel at about 1 pm. Hotel was right on the bank of a tributary of Li River (which is the biggest and best-known river in this area). Dragon River is a peaceful, and small river, and Mountain Retreat is situated on the bank of this river. Our room overlooked the river and as people floated down the river on small rafts with chair on it, I immediately liked the place and the hotel. Rest of the experience of the hotel didn’t disappoint us. The hotel is a eco-friendly establishment which caters to expats and locals equally, though it seemed to be full of expats. Food is very expat-friendly and very well-done, home-style. People are extremely friendly and eager to help about everything. I read their vision, mission and goals in the hotel guide in our room (first time I read such a thing about a hotel in such a guide!), and everyone indeed seemed to live up to those vision and mission statements. A highly recommended place to stay. 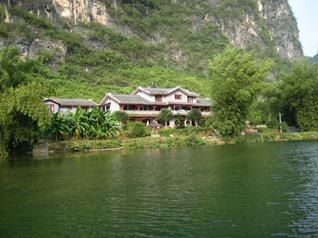 After some leisurely walk on the river bank, and rest, we asked the front desk to help go see the light show and take a Li river cruise. They promptly helped us get the tickets as well as round-trip taxi arrangements. I was very impressed with their efficiency and eagerness to help.

We went to see the Light show which was created by Zhang Yimao, who has also created and choreographed the opening ceremony for the 2008 Beijing Olympics. This is an amazing light and music show with 7 mountains and Li river as the stage (which is said to be the biggest natural stage in the world). It was amazing to such imagination and grandeur and courage in creating such a visual and aural treat (even though we couldn’t understand the lyrics and the story too much). However, this show is so popular that we had to be part of a tour group (we didn’t realize this when we booked from hotel) and the place itself was as crowded as great wall of china, and inside was very packed too. Show was great, but it is not for kids (especially when they do not understand the language), because most of the enjoyment comes from seeing the grandness of production and awe at various creations of sight and sound. My daughter was thoroughly bored, but we enjoyed it! 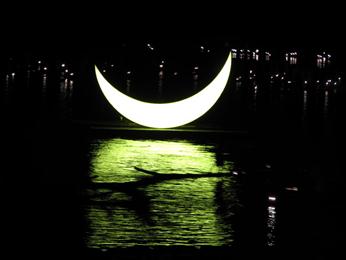 Day 2 morning was spent mostly lazing around in the morning, enjoying the dragon river views and so many people floating down on rafts. We had our breakfast in the hotel restaurant, on the bank of the river and got ready to check out to go to the other hotel (the hotel provided shuttle to their sister hotel). 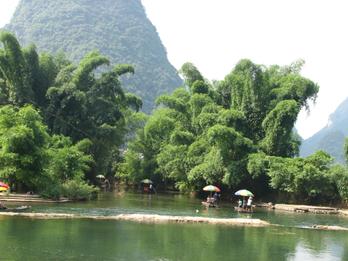 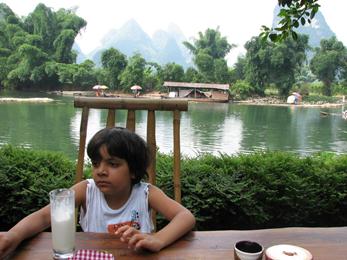 There were 2 options to the cruise: we could take the cruise from Yangshuo to the destination (Yangdi or some place), or we could drive up to another place called Xingping and do a shorter one. We did the shorter one and the hotel arranged our roundtrip taxi as well as the river raft. The taxi 1-way trip was 1 hour, and the entry point for Li river was the place whose picture is on 20 RMB note:

It was about 2 hour round-trip cruise on a small raft, and well-worth the 250 RMB it cost us: 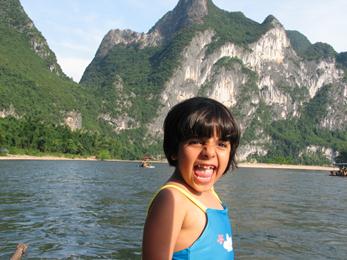 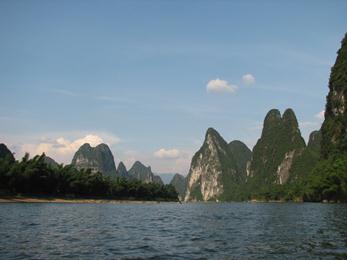 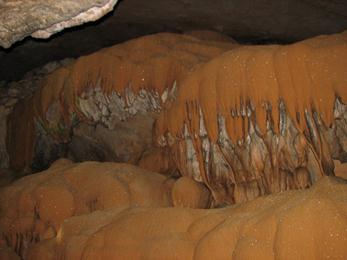 On the day of departure, we planned to visit one of the water caves. Since the mountains in these areas are actually limestone mountains (karsts), water has eaten into their bases and created very interesting water caves. There were lots of advertisements about caves to visit. So we asked the front desk of the hotel and they got us the ticket. The cave is slightly outside the city and the public transport provided by the cave company is nothing worth mentioning, but since those are the only options available, we had no other choice. Another problem was that when we came out of the cave, we had to wait for the bus to get filled and then we could leave (since this was the day of our departure, we got pretty nervous in the end but finally made it). Not knowing language meant we had to rely on visual tips like people getting on the bus .

We ended up spending about 3 hours inside the cave and it probably required more time. It was all walking, so it was very tiring but my daughter managed reasonably well. They had cold water springs where you could take a dip as well as hot water springs, though we didn’t get enough time to spend time in the hot one. Better information about the cave would have helped. Also, carrying as little things as possible would have helped, we carried lots of of eatables which we didn’t consume but had to carry as we bent and crouched to get through some of the constrained cave areas. Not really comfortable with a 1.5 year old who is trying to sleep comfortably in your arms, but we managed it!

They also had a mud bath and you can buy your pictures for 10 yuan a piece of you bathed in mud; again we didn’t have time or patience to do this. Overall, a good but tiring experience. Scheduling it on the last day was probably a bad idea, we should have done it on day 2.

Travel back to the airport was non-eventful. It started raining heavily on the way back (while we were in yangshuo, even though the weather was hot, since it didn’t rain while we were there, it was great overall), but we reached airport on time, and were back in Shanghai home by 10 pm.

A great trip overall, lots of pleasant memories to cherish, and heart full of hope that we would go there again!